On 18th August 2019, the graduation ceremony of the first bachelor of Tibetan Studies from The Department of Academic Tibetan Studies of Dzongsar Khyentse Chokyi Lodro Institute was held inside the main shrine hall ‘Kelsang Chokyi Jungney’ of the institute. 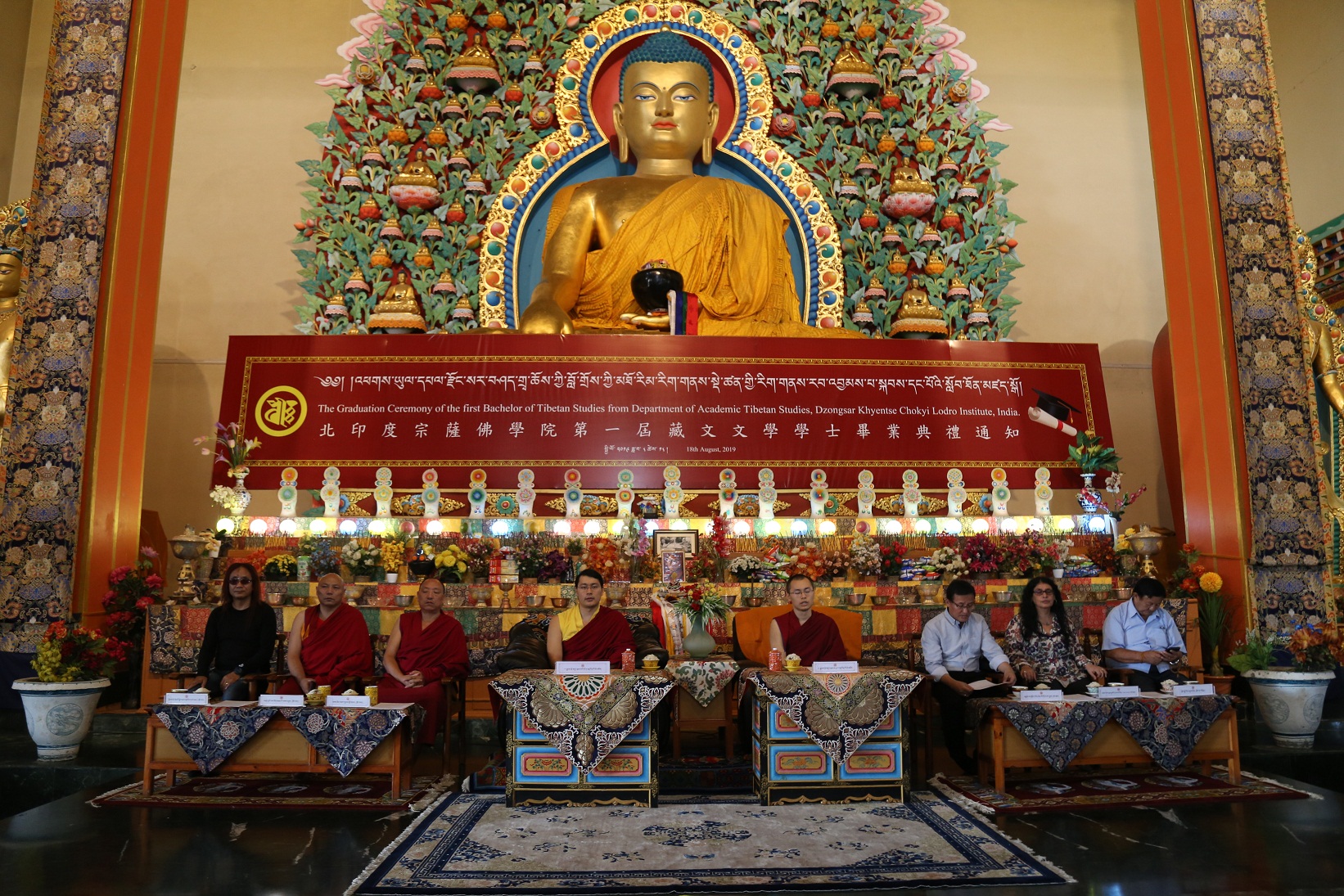 The graduation ceremony of the first bachelor of Tibetan studies

His Eminence Dungsey Avikrita Vajra Rinpoche and His Eminence Dungsey Abhaya Vajra Rinpoche graced the ceremony with their presence as a head of the gathering. Khenchen Jamyang Losel, the abbot of the institute, Khenpo Samdup, the special guests, Professor Dr. Dorji Wangchuk and Madam Professor Dr. Orna Almogi from University of Hamburg, Germany, Lopen Telnakpa Lodro Palsangpo from The Department of Academic Tibetan Studies of Dzongsar Institute and the principal Dendup Dorjee of Dzongsar Kanishka Primary School were among the guests to begin with the opening of the ceremony. Other attendees like Khenpos, teachers and monks of Dzongsar Institute, all teachers and students from The Department of Academic Tibetan Studies and Kanishka Primary School of the institute, both the direct and indirect students of the late Khenchen Kunga Wangchuk and some health personnels and patrons from Taiwan were also present. The ceremony commenced with His Eminence Dungsey Avikrita Vajra Rinpoche foremostly offering butter lamp and taking the seat amongst other guests, which was followed by the resounding of the sutra of remembering Triple Gem and serving of the sweet fried rice to the gathering. 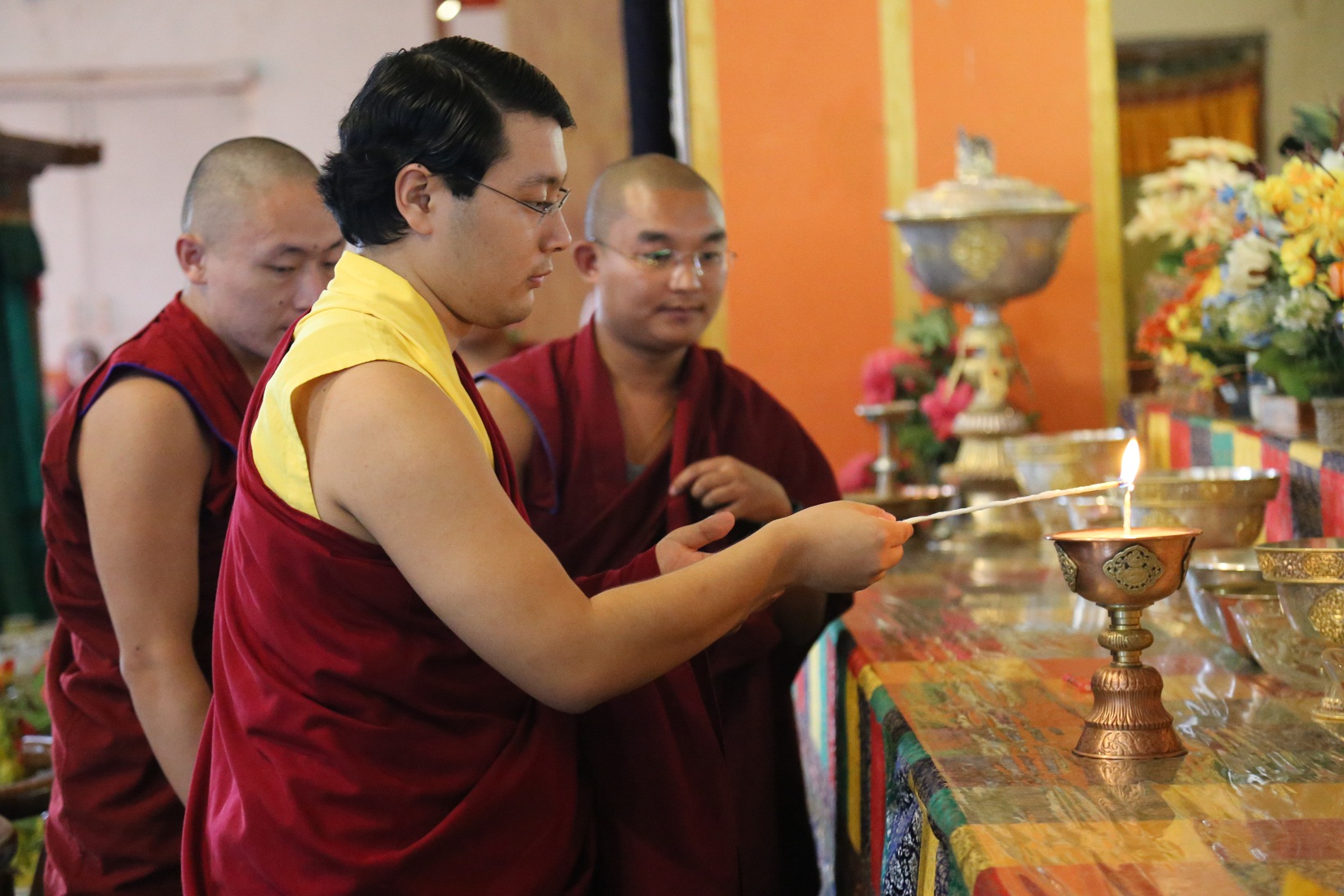 Then, the abbot of the institute, Khenpo Samdup began with the speech. Highlighting the purpose of starting the The Department of Academic Tibetan Studies at the institute, Khenpo said that as they all were not only Buddhist but also the learners of Tibetan Buddhism, their main aim lies in comprehending the meaning of the subject matter of the sutras and tantras of Tibetan Buddhism with all their commentaries. So, as said by Khenpo, in order to gain the clear comprehension of such subject matter, it is indispensable to learn Tibetan language and Tibetan studies as the means of expressing the subject matter is formed of them. 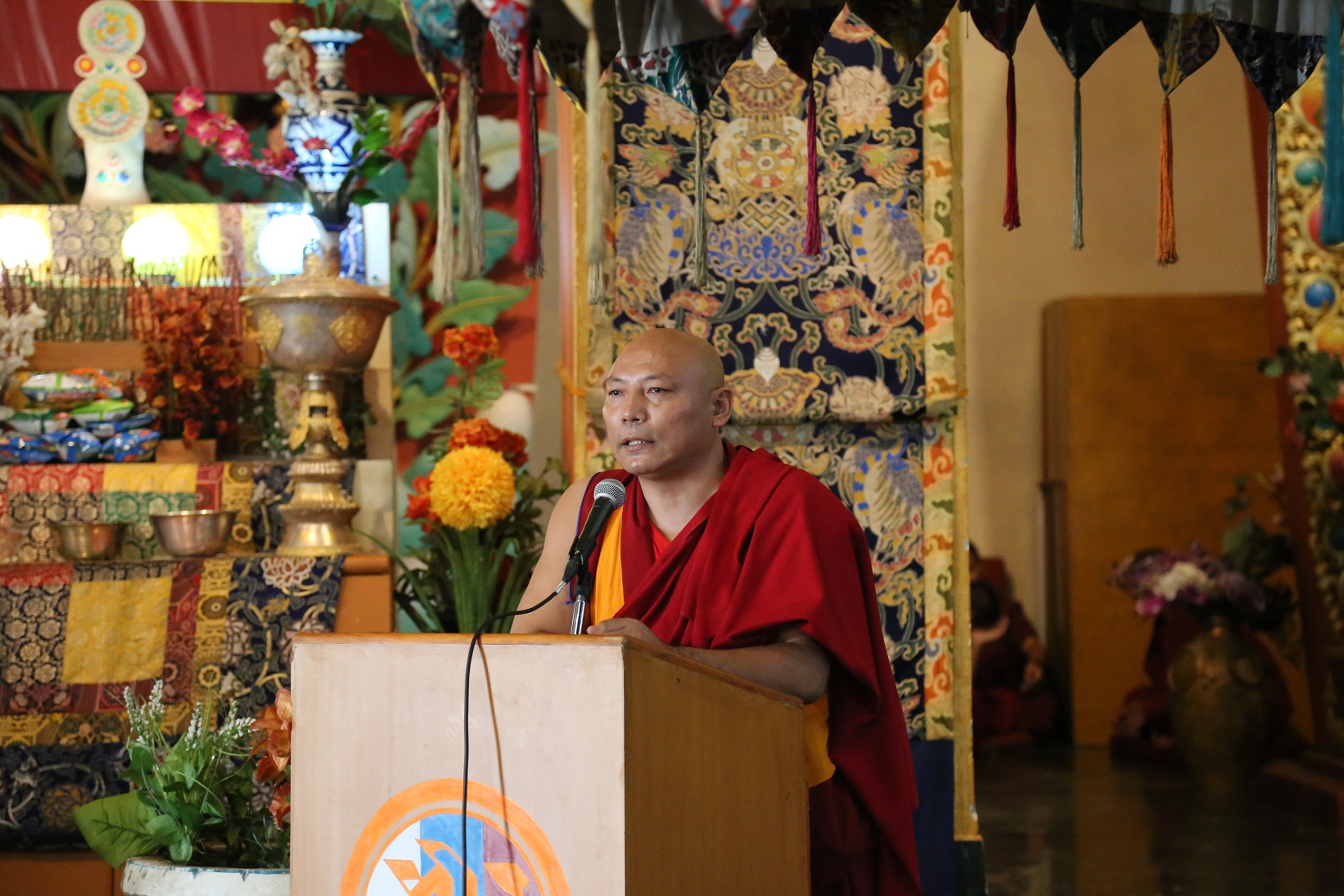 Khenpo also pointed out that generally, in Tibetan community in exile, there are many schools like TCV, Sambhota and so on, however, since most of the students after passing out from class ten and twelve go to Indian colleges, they get deprived of learning Tibetan studies. Other than Varanasi and Sara Colleges there is no provision of continuing with the study of Tibetan studies in depth within Tibetan schools. Likewise, even within Tibet, Tibetan studies are available merely in the lower schools but it is very rare to be the same case in the higher colleges to study them in depth except for Chinese and other academic studies. Owing to this, when there is decline in the place of learning Tibetan studies, resulting into the vulnerability of the status of Tibetan studies which are the basis and means of expressing the sutras and commentaries, it is the time to take responsibility of learning them especially by the monks and nuns of Shedras and those from other institutes. Khenpo Samdup further expressed that if this responsibility is not taken, at the end of our generation in future, there is a high risk of Tibetan Buddhism which consists of a complete sutras and tantras being left as unfathomable. Therefore, generally, we being buddhist and particularly being the learners of Tibetan Buddhism, we have to keep the words of such means of expression intact without decline. 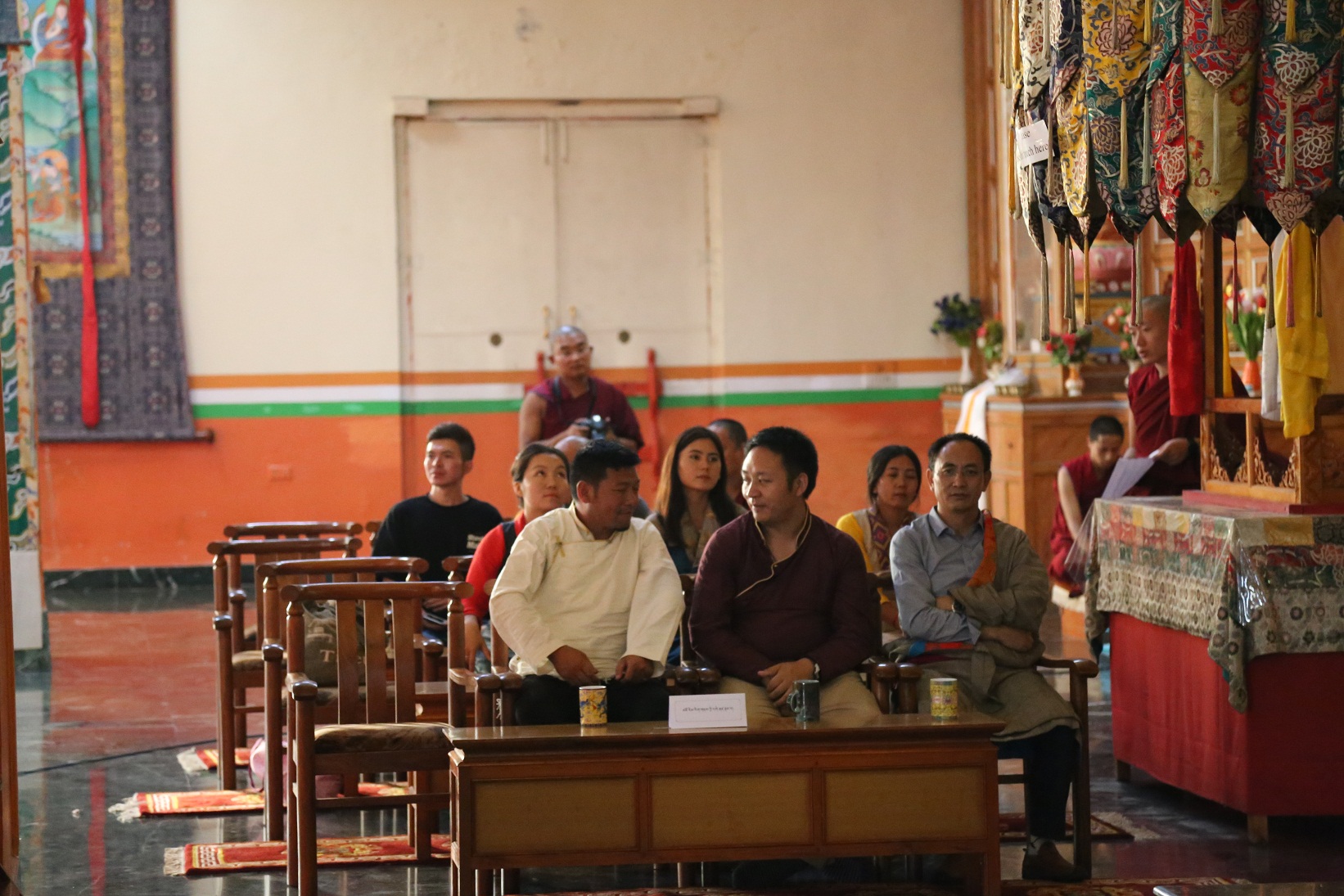 The teachers of Tibetan studies of Dzongsar having their seats 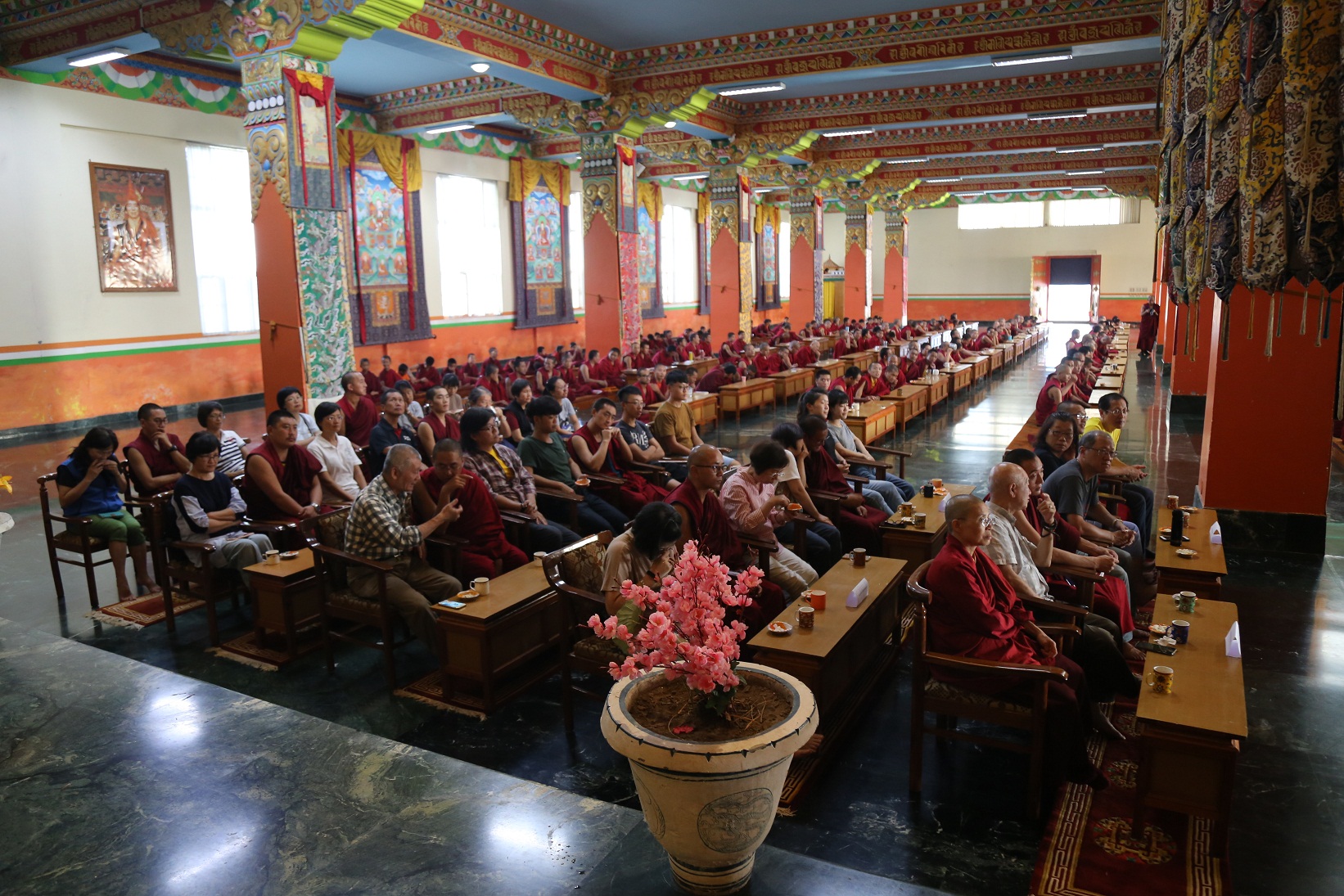 The graduation ceremony of the first bachelor of Tibetan studies

Tibetan studies are of paramount importance for all scholar related works like explanation, debate, etc, without which it becomes like an armless person trying to climb the cliff. Owing to many reasons of being important to learn Tibetan studies, after having meeting for several times in presence of the dharma master—His Eminence Dzongsar Jamyang Khyentse Rinpoche—the administrative committee of the institute had several discussion on establishing The Department of Academic Tibetan Studies. It was the noble wish of the late Khenchen Kunga Wangchuk too. During winter vacation, Khen Rinpoche Kunga Wangchuk himself used to ask some students to go to Sara and other such institutes to learn Tibetan studies. Appraising all attendees of the ceremony about Khen Rinpoche’s advice on how important it is to make learn Tibetan studies by bringing its teachers to Dzongsar Institute as well in future, Khenpo Samdup said that the establishing of The Department of Academic Tibetan Studies at Dzongsar Institute is a hope of both His Eminence Dzongsar Khyentse Rinpoche and the late Khen Rinpoche Kunga Wangchuk, incorporating the administrative committee of the institute and all the students. The process of establishing The Department of Academic Tibetan Studies and its purpose were introduced. 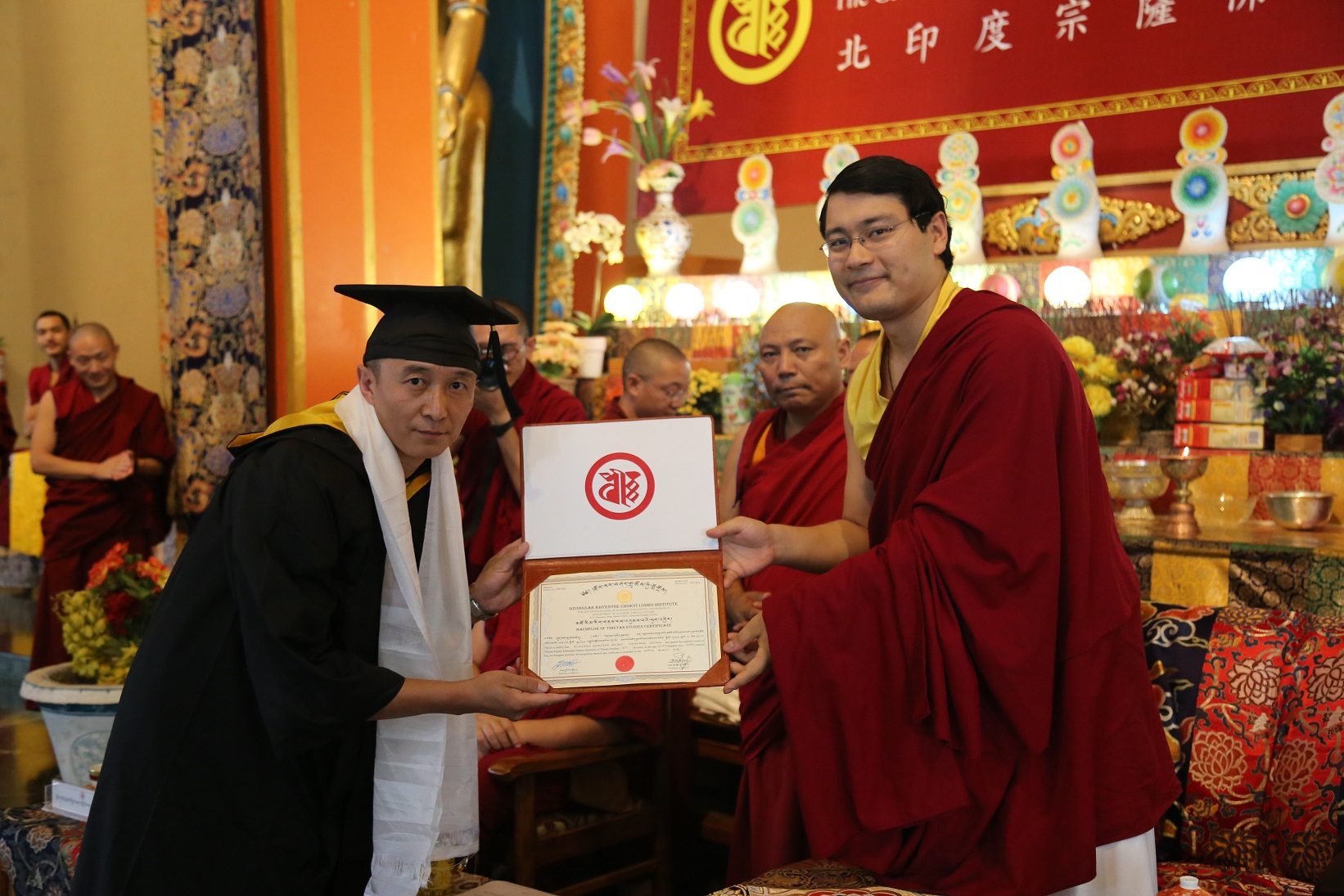 After the arrival of both the Lopens, it was quite easy for the institute to find the teachers as both of them were well familiar with the presence of other qualified teachers in the exile community. So, further, Lopen Dorjee Phuntsok, an ex student of the institute, was invited as a history teacher and Lopen Tashi Gonpo as a grammar teacher. Khenpo said that all these could finally culminate in producing of the first bachelors of Tibetan studies from Dzongsar Institute for which the graduation ceremony was conducted that day. The fact that the institute was able to found the undergraduate’s class of Tibetan literature after Lopen Telnakpa Lodro Palsangpo took the responsibility as its director, and all the journey that the institute has undergone till then were also mentioned by Khenpo. 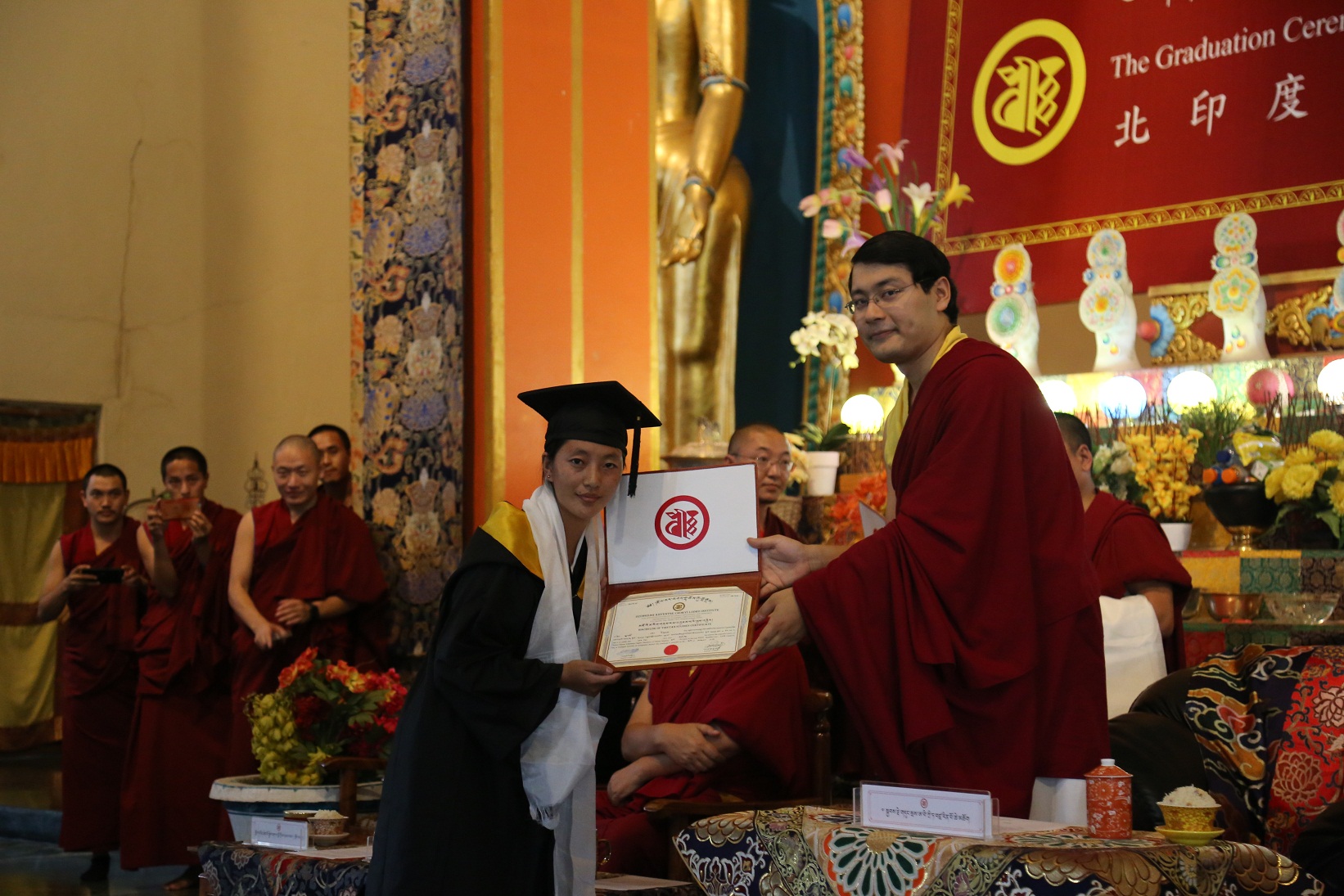 Lastly, as a request for the new bachelors, Khenpo Samdup said that, by taking their teachers as an example they should embrace the responsibility of benefiting to Tibetan studies by passing what they have learnt to others, and should not act out of arrogance to denounce others and bring trouble in the society. 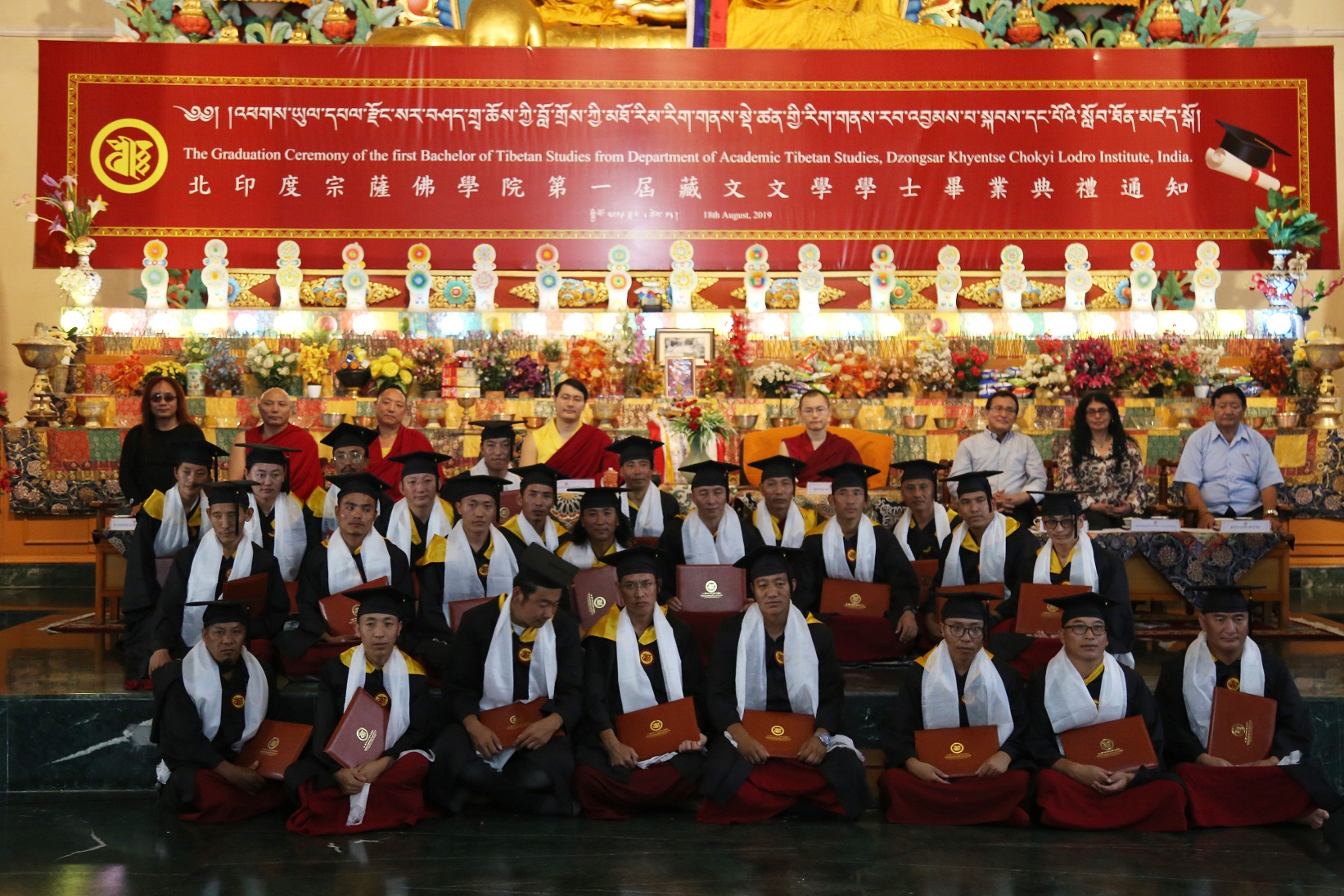 Thereafter, expressing the heartfelt congratulations to the bachelors, the special guest, Professor Dr. Dorji Wangchuk from Hamburg University of Germany said in his speech that, we as a Buddhist accept the four noble truths. Professor said that the principle of the four noble truths is the system founded by Buddha mainly on the basis of adopting and abandoning by knowing. Likewise, today’s secular education or whatever logic and reasoning there may be, it is basically aimed at knowing what is right and wrong or knowing the appropriateness and inappropriateness. Adding further, Professor said that, whatever the future holds for one’s life, one should always strive to gain knowledge without leaving it or without ever being gratified with it. It is told that, while learning, it is important to make sure to gain knowledge for knowledge sake, rather than gaining it for earning properties and fame. 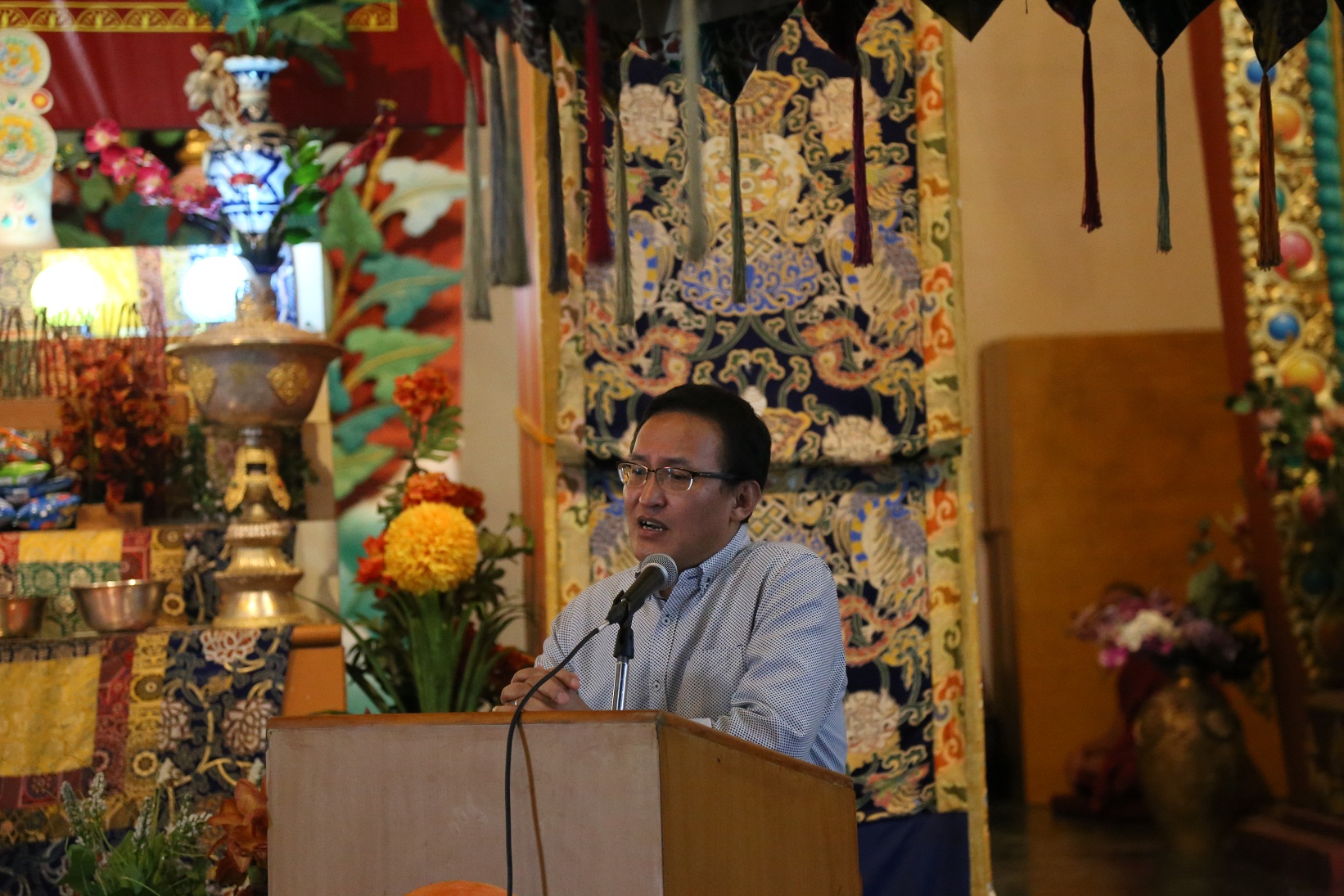 In the concluding part of his speech, Professor said that, among many branches of education in the world, the invaluable ones in the society where the learning of Tibetan Buddhism prevails, are learning about the wisdom and cherishing of good heart. It is the value of the society of Tibetan Buddhism that even the baddest of the person in the society of Tibetan Buddhism possesses the value and view of considering the good heart as something good. In order to increase the wisdom and compassion which are the means that is important and which immeasurably developes all human beings, it is to cherish the good heart and to learn without ever getting gratified with it. Finally, Professor requested the bachelors to know the kindness of their teachers due to whom they were able to complete their graduation. They were also requested to take that achievement merely as a beginning, keeping in mind that they still have a lot to improve and learn. 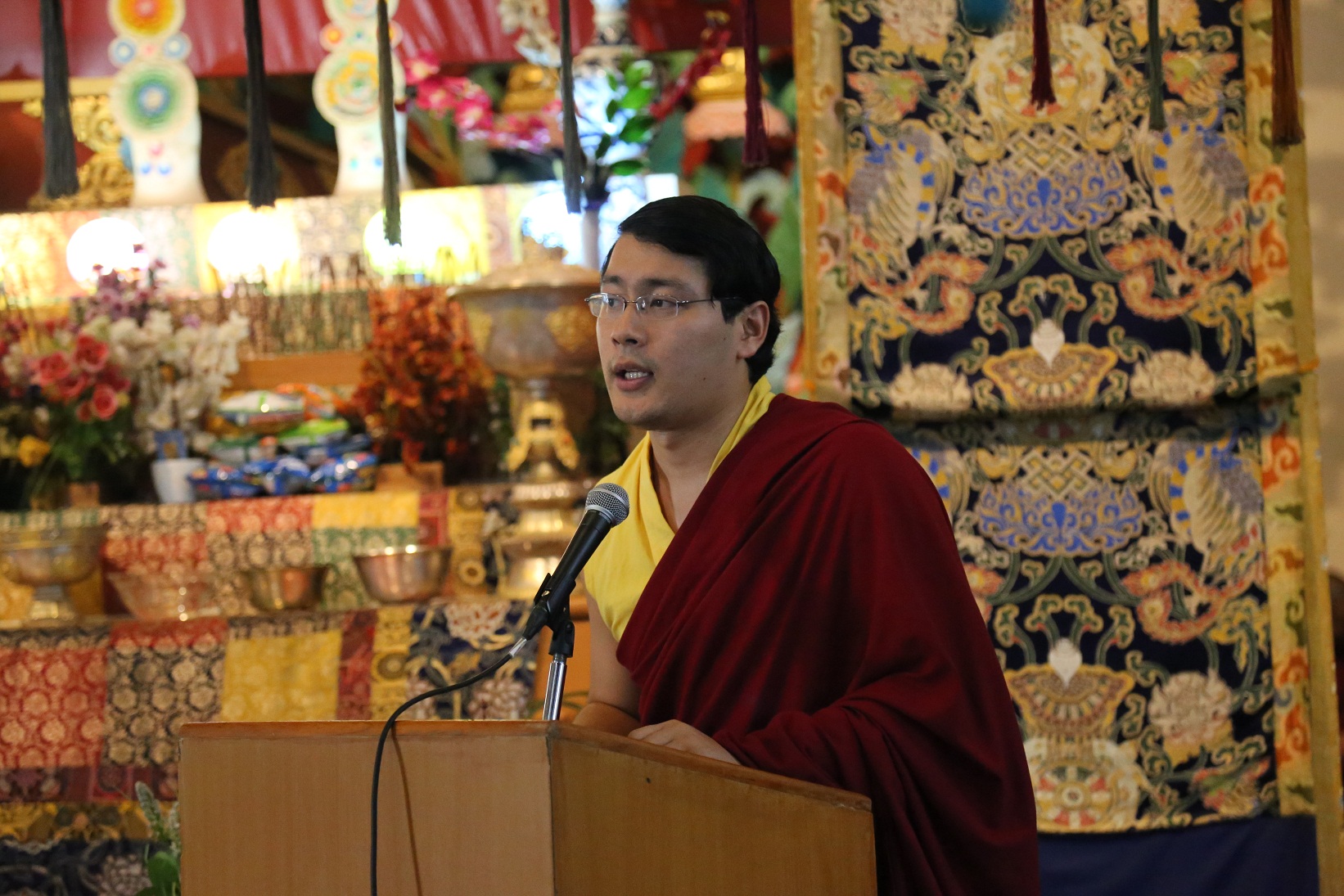 Then, the head of the gathering, His Eminence Dungsey Avikrita Vajra Rinpoche granted the bachelor’s degree to the first bachelors of Tibetan studies. In his advisory speech, Dungsey Rinpoche said that, it was a great achievement to have not only founded the class of Tibetan studies but also to be able to produce the bachelors of Tibetan studies within a short span of time. Rinpoche expressed his warm appreciation to the administrators and teachers who made that achievement possible. For the bachelors, Rinpoche mentioned that, since they have completed the graduation from the qualified teachers who holds a high regard in the society, it is important for them to generate the notion that they would match their name and act, appear as praiseworthy and would become exceptional from others. Rinpoche said that the ceremony had just begun and whatever happens in future, it depends on present diligence and motivation. Rinpoche advised to be diligent and to strive to be wise and learned one like mentioned by the great Sakya Pendita. It says that even if there are many dull people who hardly bear any knowledge, a single qualified person present can clear the darkness of the whole world. After the speech of His Eminence Dungsey Avikrita Vajra Rinpoche, the bachelors of Tibetan studies took the group photo with guests for remembrance. Finally, the ceremony came to end with the ornament of prayers offered by all. 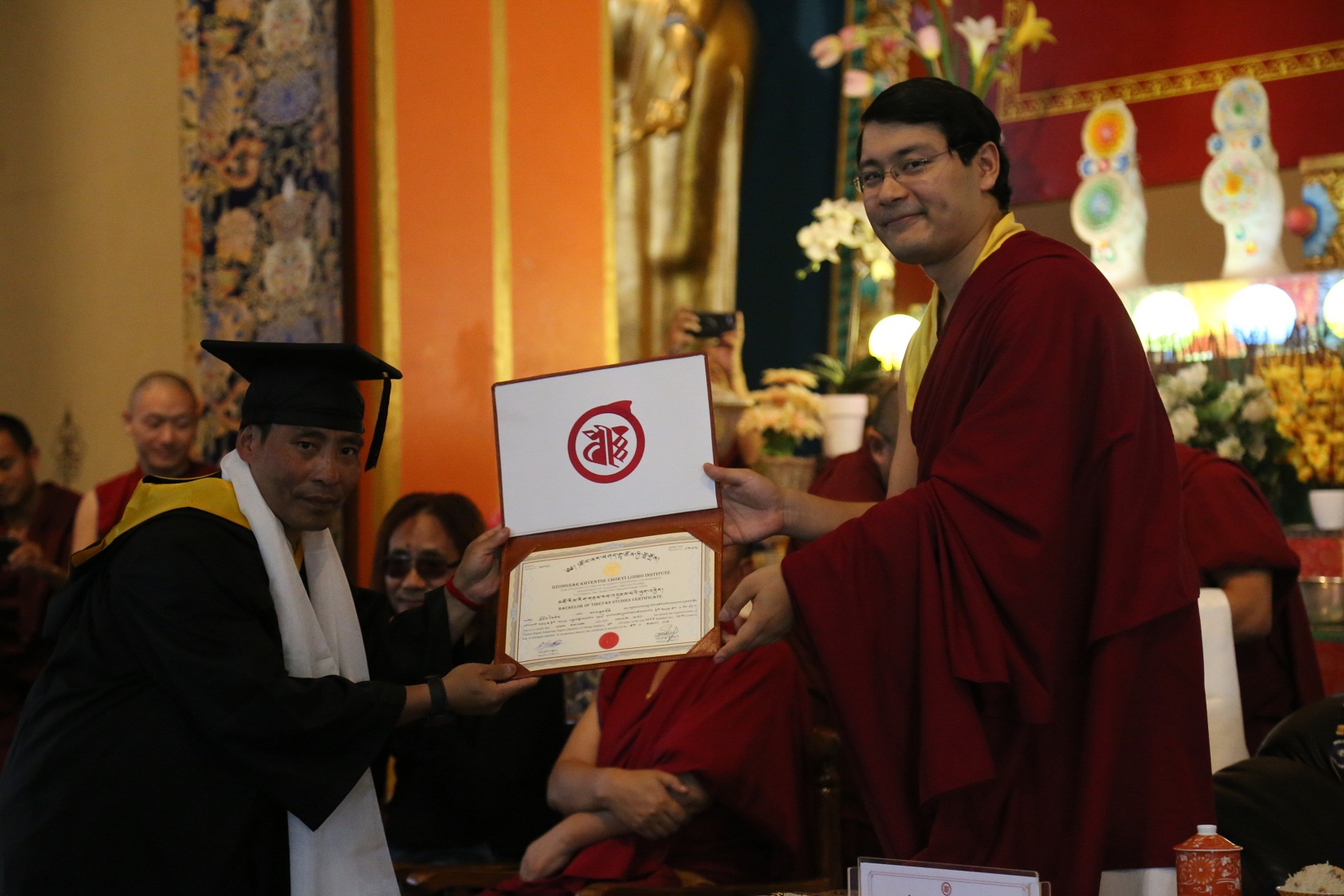 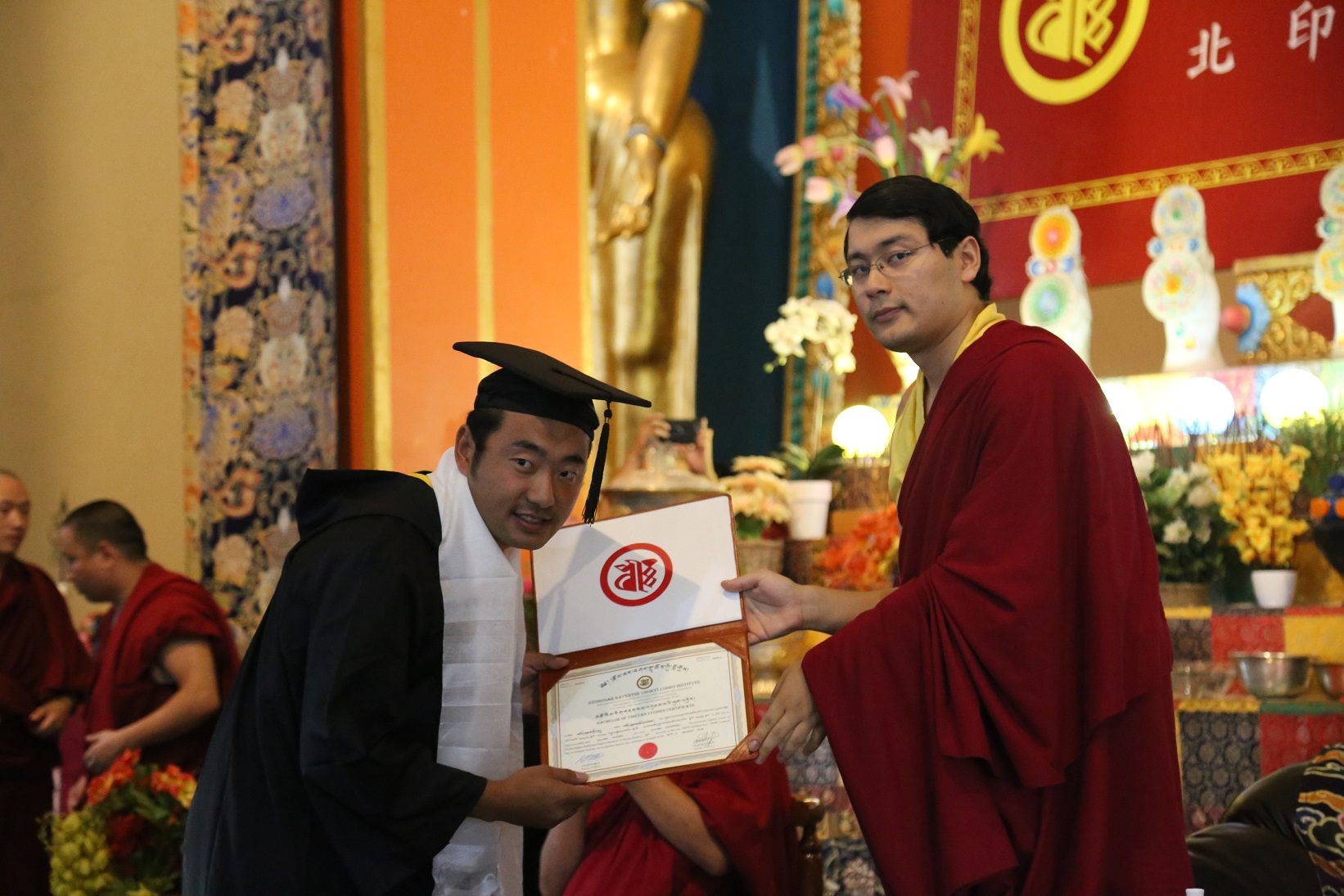 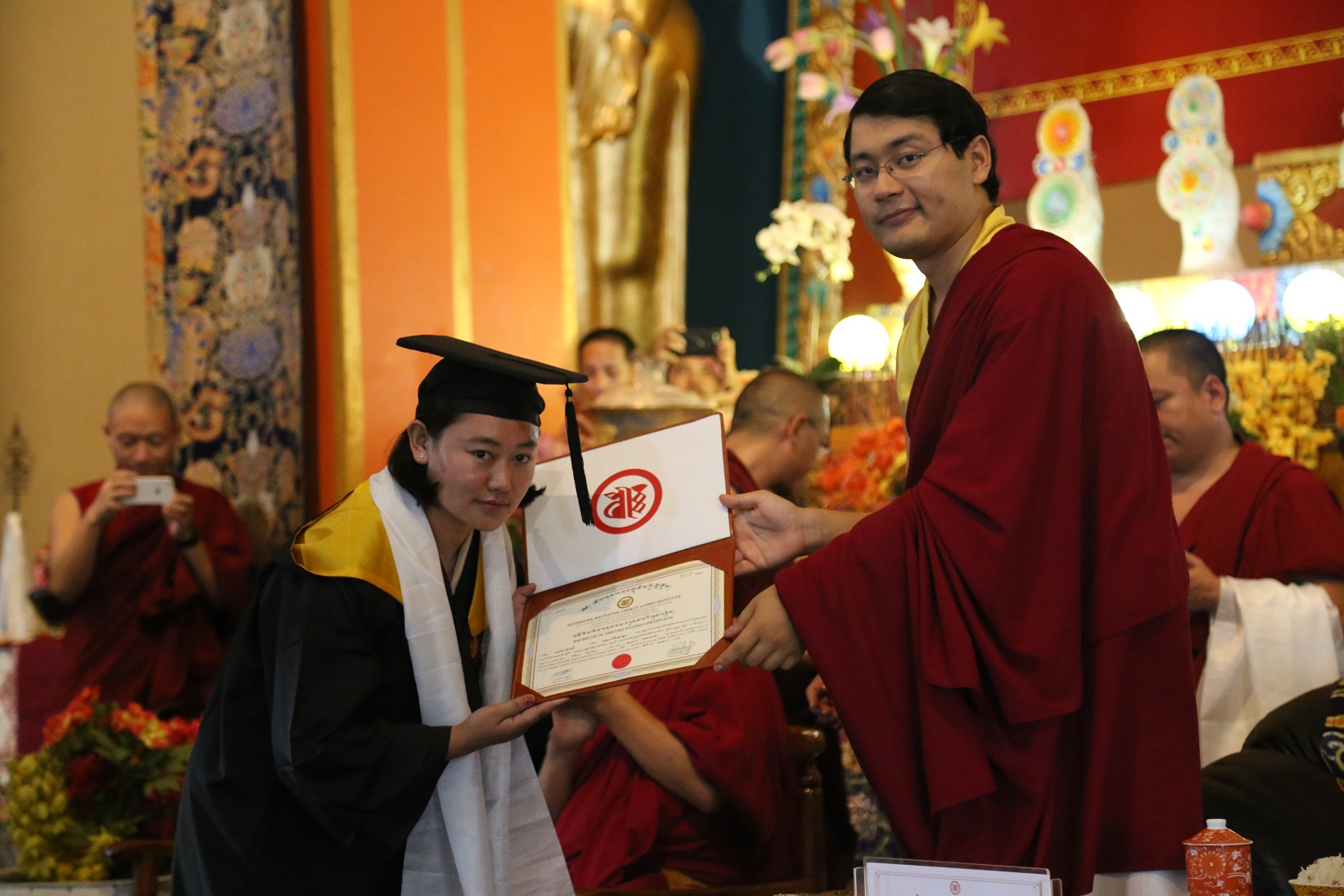 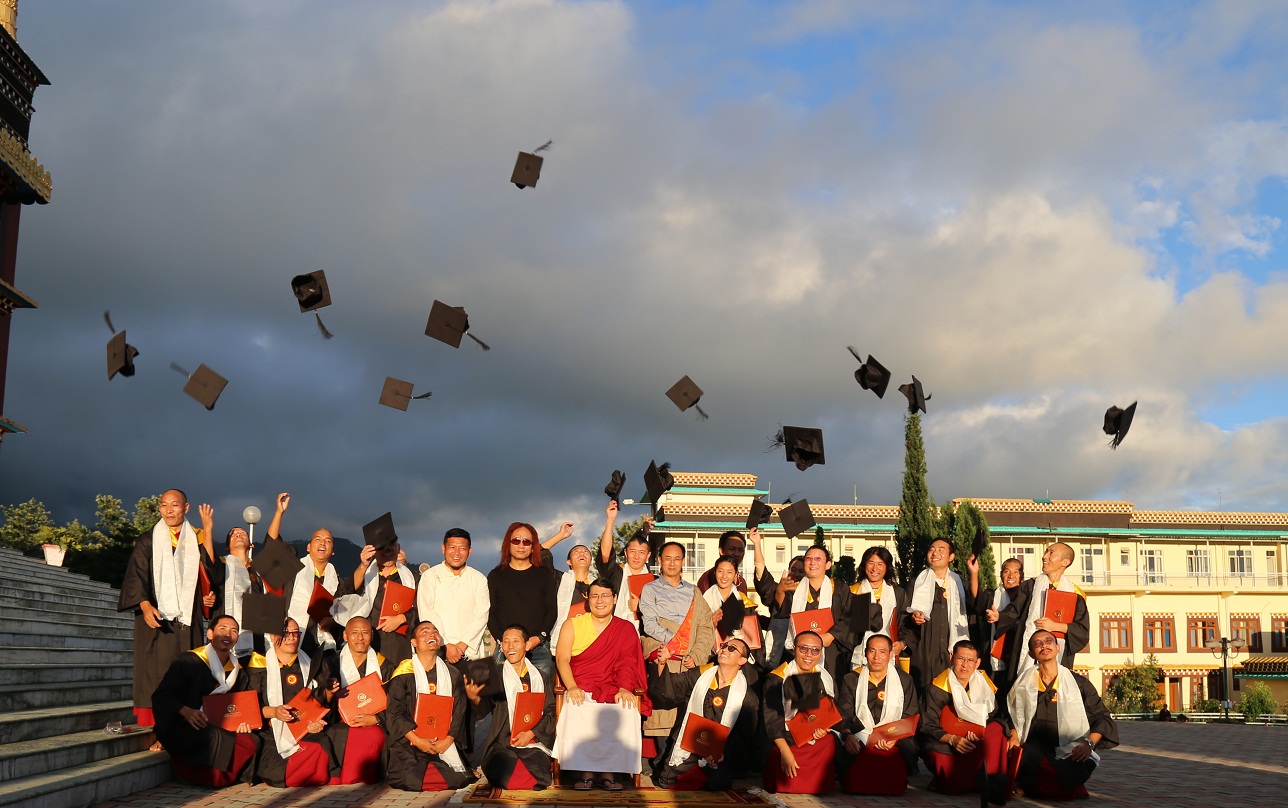