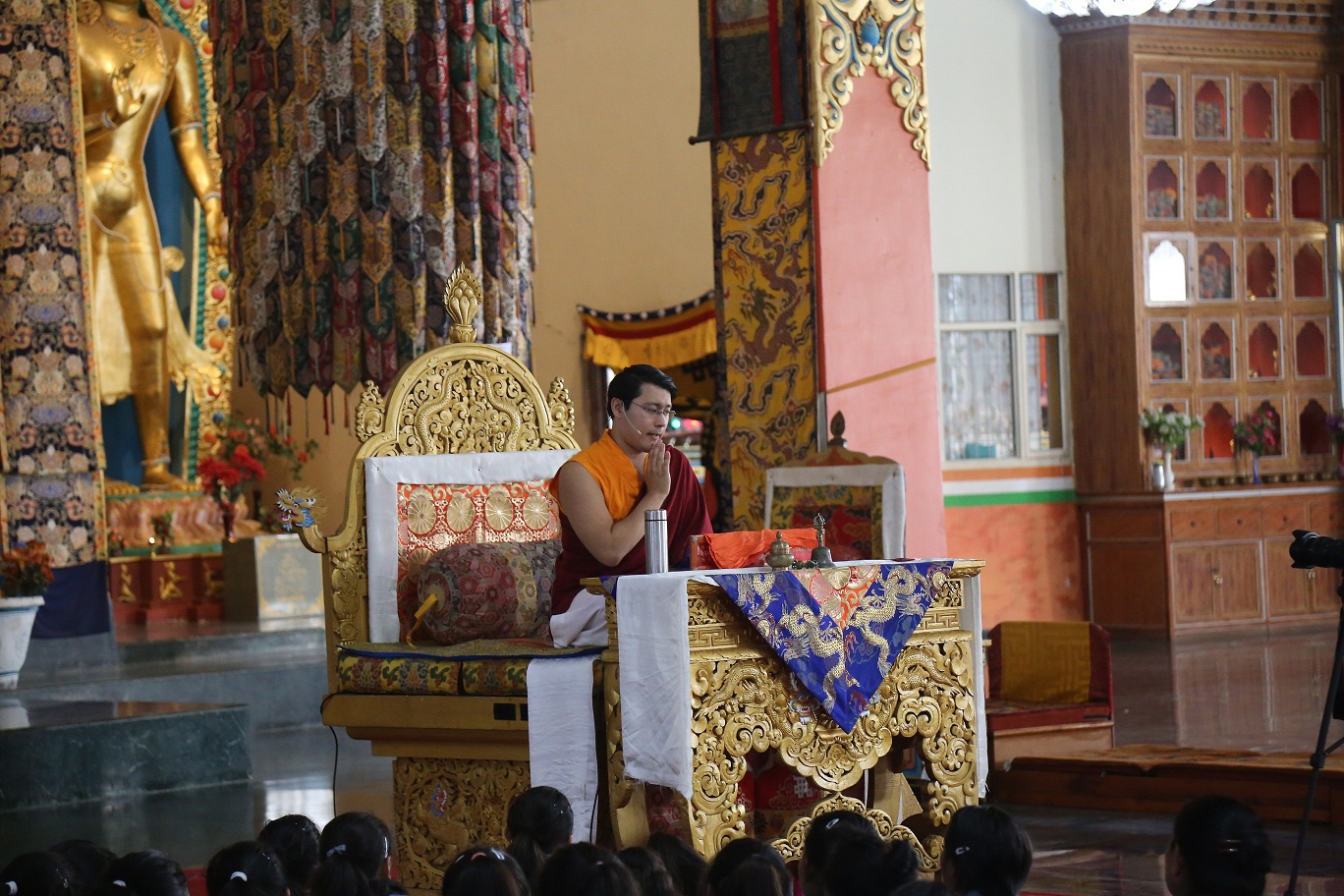 Since 2018, after having the discussion with some important community members, Dzongsar Institute has been arranging the teaching program on ‘Introduction to Buddhism’ for the public. With kind acceptance to the wish and imploration of administrative committee of the institute, His Eminence Dungsey Avikrita Vajra Rinpoche conferred the teaching for the third time, at the main temple ‘Kalsang Chokyi Jungney’ of the institute, to over five hundred attendees, comprising the students from nearby schools, public of Tibetan settlement area and the students of Dzongsar Kanishka Primary School. 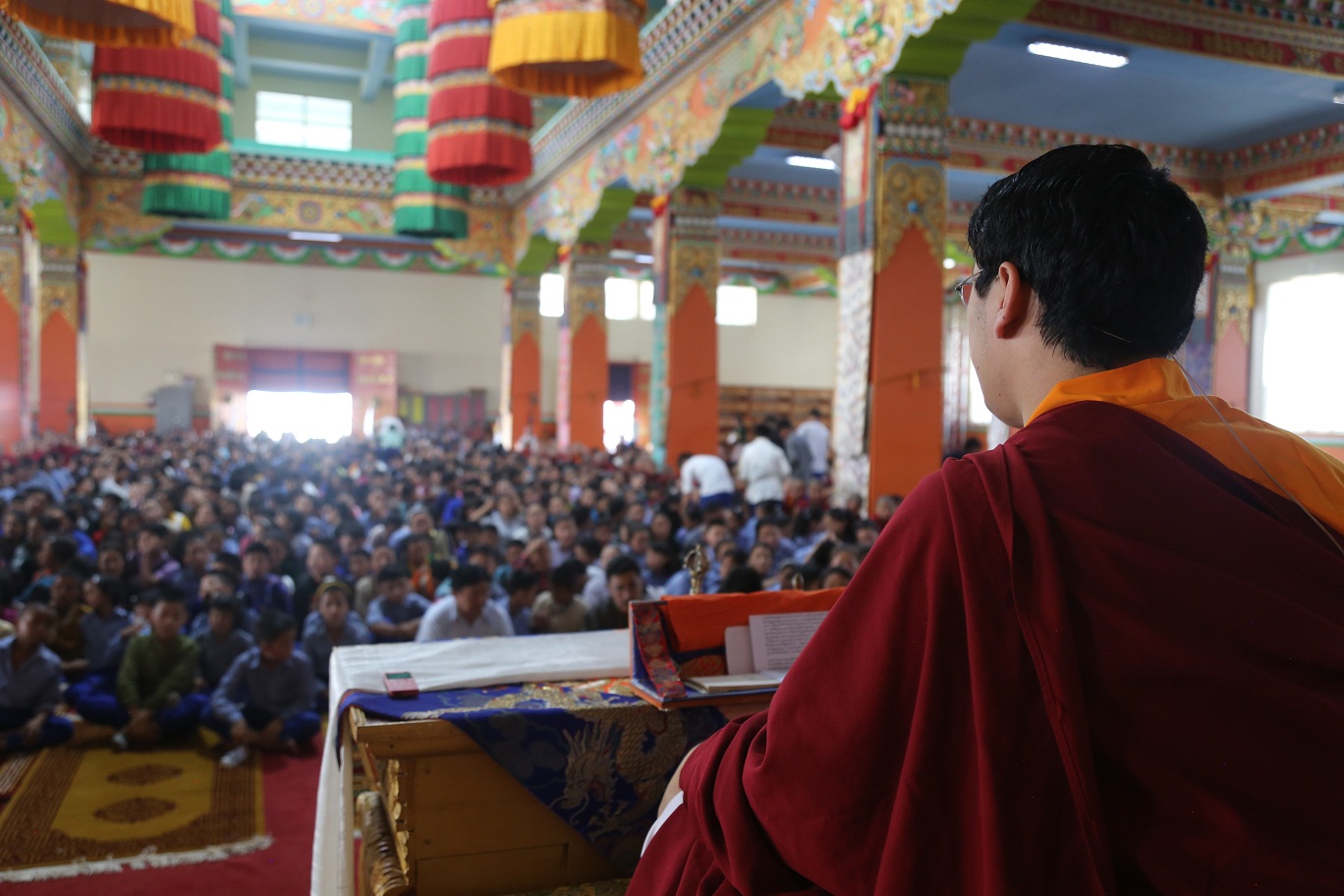 Foremostly, as a preliminary aspect of the teaching, highlighting the fourth Tibetan month which has turned out to be a very great period of attaining enlightenment by Shakyamuni Buddha, His Eminence Dungsey Rinpoche, likewise, advised us to strive to make one of the days of, for instance, second Tibetan month, to be a great period of attaining enlightenment by oneself in the future. Dungsey Rinpoche advised that we have to practise the dharma without wasting the precious opportunity when we have gotten the precious human life, met with the sublime dharma, when Buddha has also taught the dharma in accord with the mindset of the sentient beings and when there is an opportunity for all of us as well to practise the dharma according to our dispositions and likes. Further, adding to the preliminary mode of the teaching, Dungsey Rinpoche gave a profound advice in which Rinpoche expressed that since we need the guru in order to practise the dharma, it is of utmost importance that we make offerings to the guru and have conviction of the guru as being the real Buddha. The guru need not be the renowned one, rather even if we have an ordinary one, the way how one’s guru should be viewed as being no different from the Buddha is also what Dungsey Rinpoche expressed. It is also advised that, like the manner in which the prince Siddhartha had searched for the way to be free from sufferings, we have to be in a position to be able to doubt where all the sufferings in life are actually coming from. Rinpoche mentioned that from one angle, our true, essential nature is the Buddha, but as we are just stained or defiled by the afflictive emotions which can be completely eliminated, we therefore always have the potential to be enlightened. By not wasting such profound potential that we are enriched with we should strive to make, like the fourth Tibetan month or Saga Dawa, the month and day of our own enlightenment in the future is also what Rinpoche kindly advised. 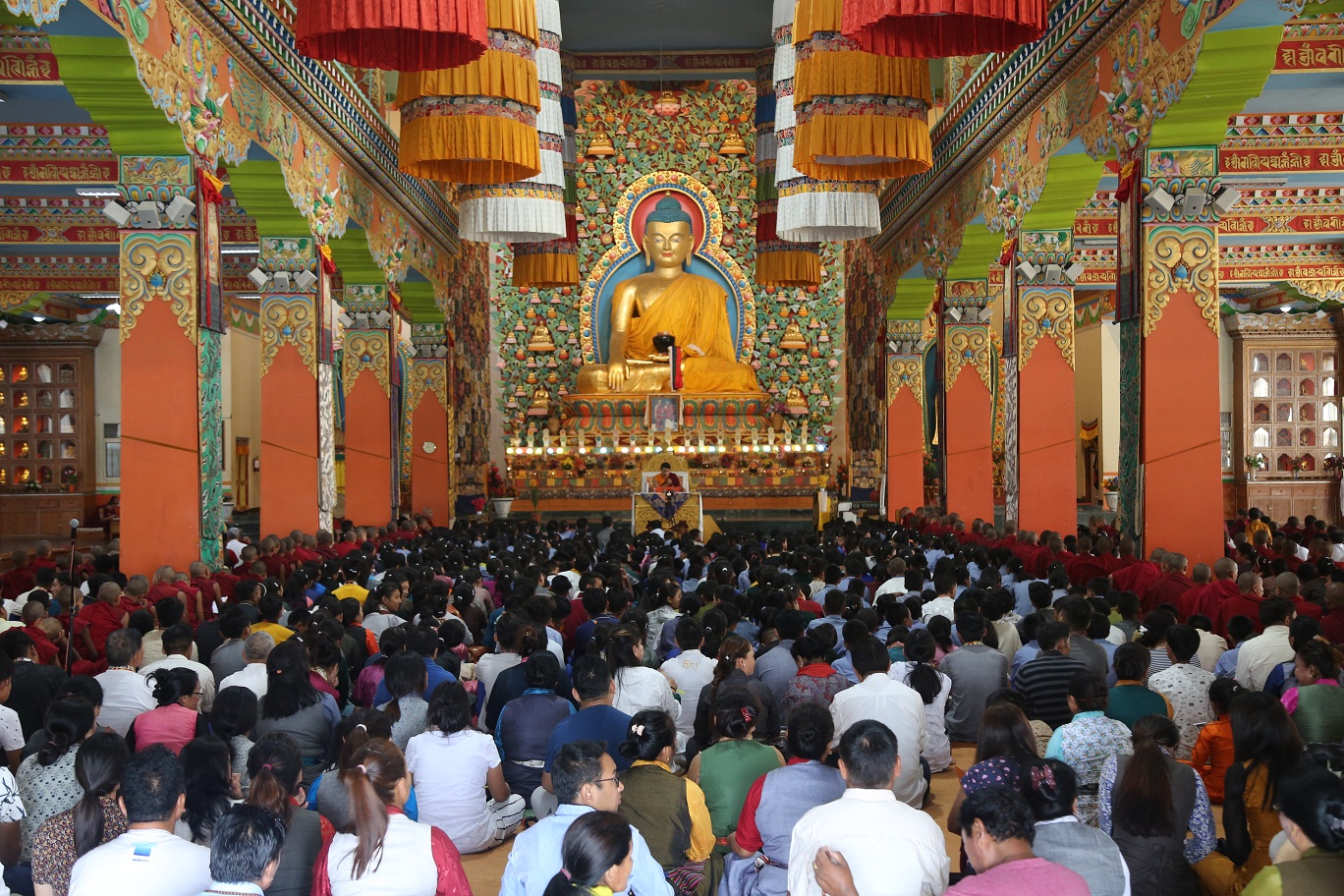 The main venue of the teaching at the temple Kalsang Chokyi Jungney. 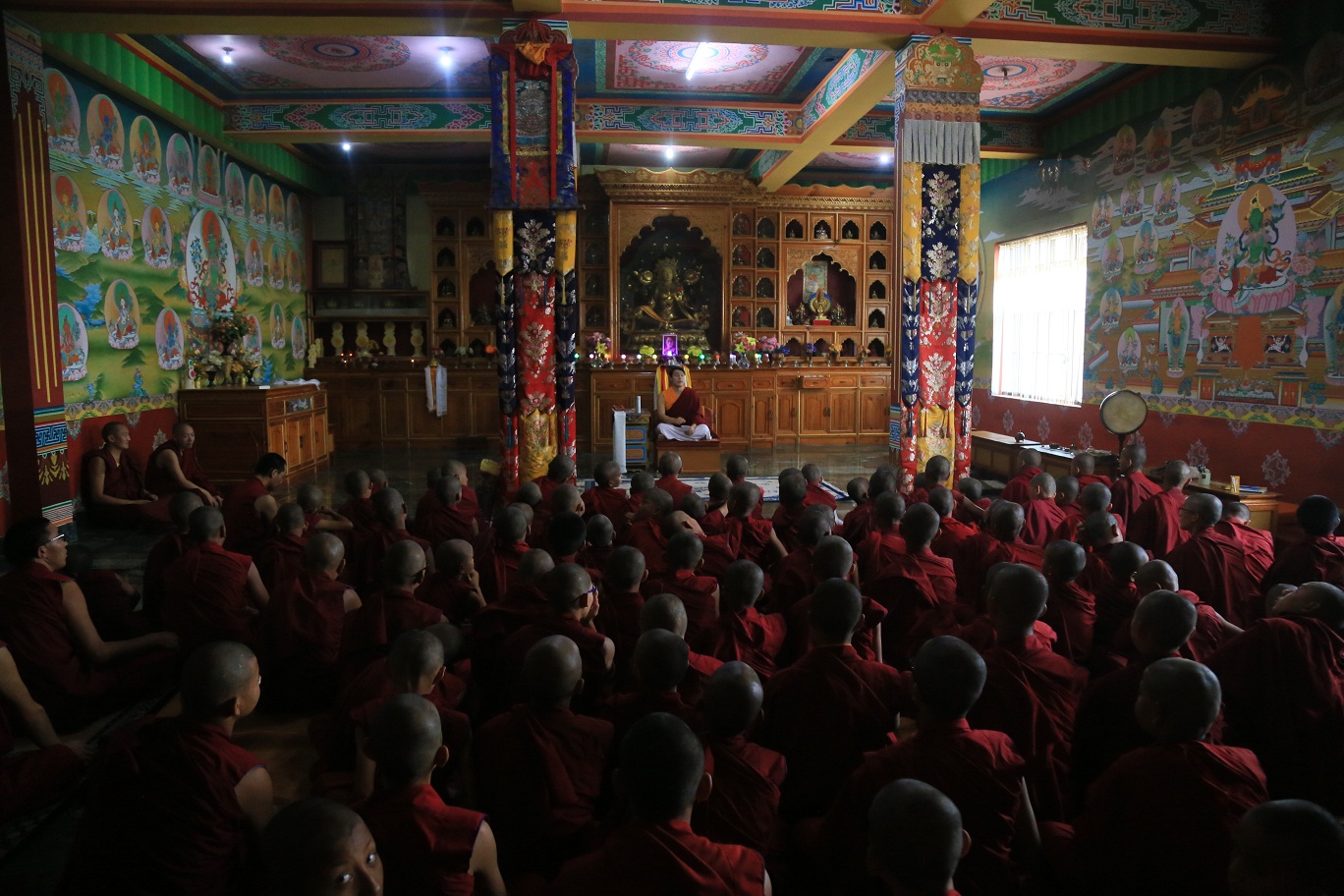 The granting of the refuge vow to the students of Dzongsar Kanishka Primary School at Tara temple of the institute.

His Eminence Dungsey Rinpoche further explained that the cessation, as said by the Buddha that the cessation should be actualized, is when the cause of the suffering is abandoned, the continuum of the suffering is annihilated which consequently gives rise to a state of peace and happiness known as the cessation. Then, as said that the path should be practised, after recognizing the suffering and its cause, and knowing that the continuum of the suffering is annihilated when the cause of the suffering is abandoned, to practise the sublime dharma which is the means to abandon the cause of the suffering is what it means by practise the path. Explaining the way, from all these the main thing, of letting the wisdom that realizes the selflessness or no-self to grow in one’s being, Dungsey Rinpoche said that since self-view or the grasping at a self or belief in the concrete self is nothing but the ignorant and deluded mind, so in order to let the mind opposite to it which is undeluded or the wisdom that realizes the selflessness to grow in one’s being, the so called self should be examined with thorough and deeper analysis and selflessness should be recognized. The Buddha has attained the enlightenment by practising the path of realizing the selflessness, and since, after gaining the enlightenment he has taught us the very way of practising the path, it is important to practise accordingly. Thus, by granting the profound advice, His Eminence Dungsey Avikrita Vajra Rinpoche introduced the Four Noble Truths. 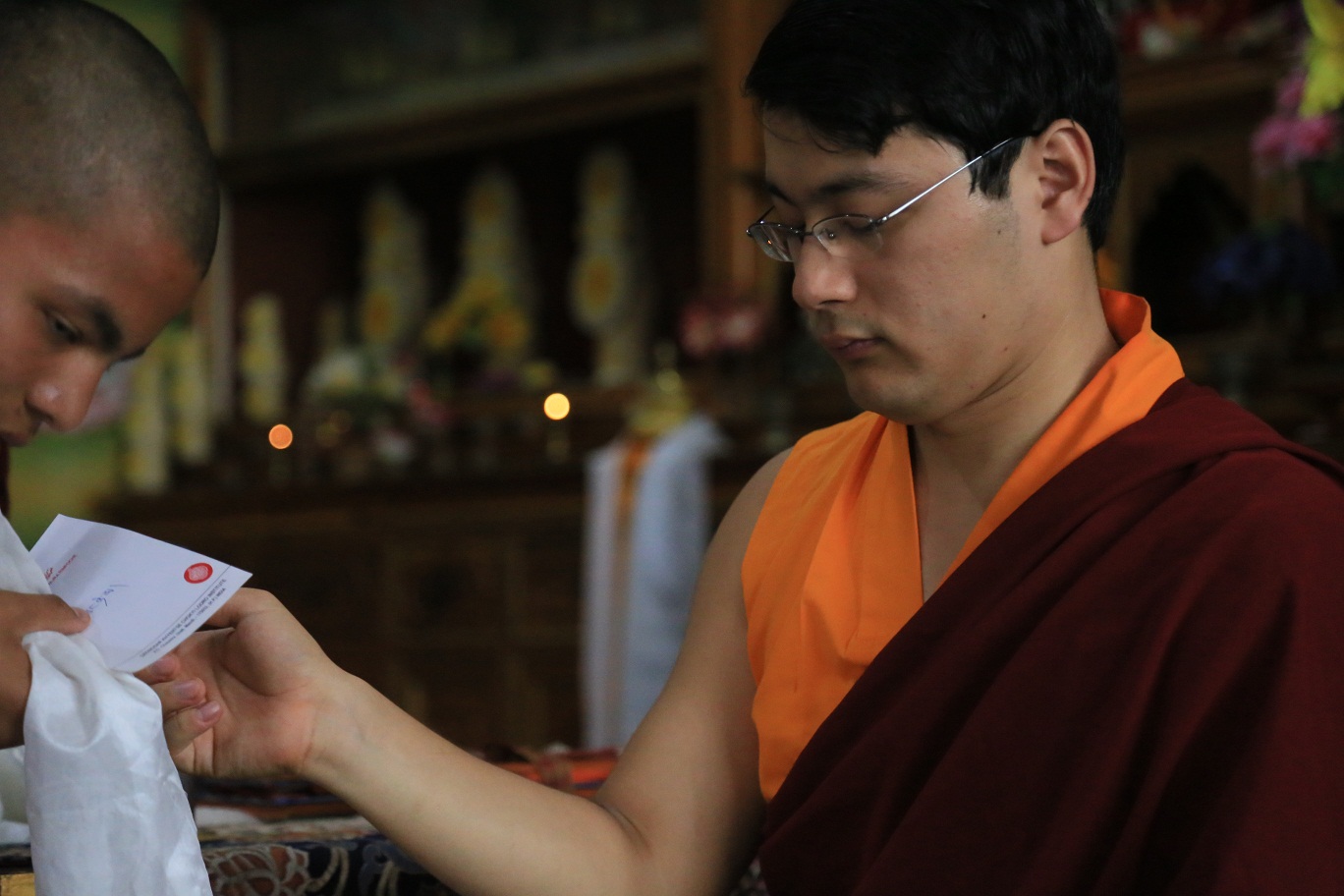 The granting of the dharma name to some students of Dzongsar Kanishka Primary School at Tara temple of the institute.

Lastly, by highlighting the 15th day of the fourth Tibetan month called Saga Dawa, His Eminence Dungsey Rinpoche said that if the wholesome or virtuous deeds are performed, characterized by the love, compassion and so on, abandoning the unwholesome or non-virtuous deeds on that day, one will be able to accumulate the merit. And if one is able to accumulate the collection of merit and wisdom, then gradually one will be able to attain the enlightenment. Thus, these are what His Eminence Dungsey Avikrita Vajra Rinpoche profoundly advised and finally concluded the teaching with the ornament of the dedication of merit.

After the teaching, inside Tara temple of the institute, His Eminence Dungsey Avikrita Vajra Rinpoche granted the refuge vow to all the students of Dzongsar Kanishka Primary School and granted dharma name to some of the newcomers as well. 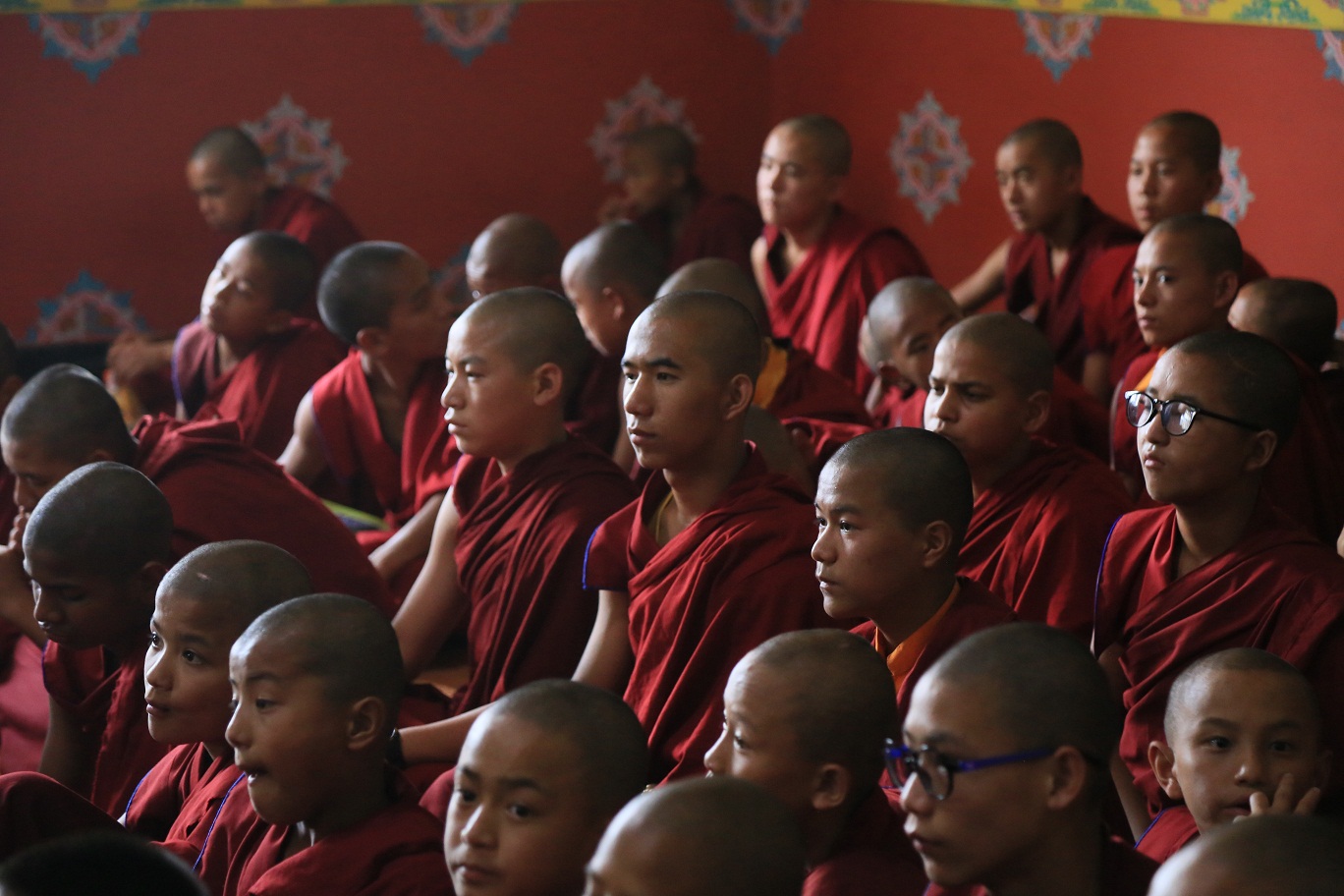