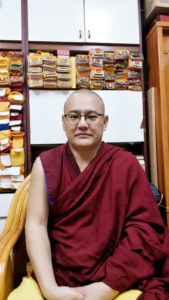 Nyima Gyeltshen  was born in 1976. Joined Drikung lineage in 1986 and studied for one year. He joined Dzongsar Shedra in1994 and studied with Khenchen Kunga Wangchuk and Khenpo Rinchen for seven years.

In 2002 at the behest of Drikung Kyabgon Rinpoche and at the advice of his teachers, he began to teach at Drikung college and been teaching for more than fifteen years. In the year 2005, he taught Dharma to western students and translators. Since 2008, during the summer breaks, he travels to west to teach. In the year 2013, he was given the title of second abbotship of Drikung Shedra. These days he teaches for six months at the Shedra and three months at Milarepa centre in Europe.

Currently he oversees the Buddhist festival of Nyenyod, founded by Drikung Chetshang Rinpoche, and also serves as the deputy chair of International Drikung Association.