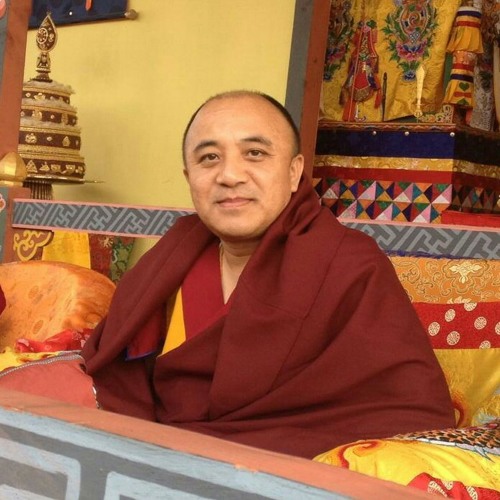 His Eminence the 7th Namkhai Nyingpo Rinpoche was born in 1966 at Tongshang Thrichu Gonpa, Eastern Bhutan to Tshering Gyaltshen, his father, and Sherabmo, his mother.

His Holiness the 16th Gyalwa Karmapa recognized the boy as 7th Namkhai Nyingpo. To further re-confirm the recognition of Tulku, the Royal government of Bhutan examined the child through various traditional methods.

In 1972, at the age of six, His Eminence was enthroned at Pema Shedrup Chholing, Bumthang and began his studies. His Eminence received numerous empowerments and instructions, including Kalachakra and Bodhicaryavatara, from H.H the 14th Dalai Lama, H.H the 16th Karmapa, H.H Kyabje Dilgo Khyentse Rinpoche, etc.

In 1984, His Eminence began the study and contemplation on the Great Thirteen Treatises in Nenang, Sikkim, and then in Dzongsar Shedra, Bir, under Khenchen Kunga Wangchuk.

He founded Lhodrak Kharchu monastery in Bumthang in 1984 and established its Shedra in 1996.

His Eminence has also transmitted his own special lineage, JangTer (Northern Treasures) teachings to the 14th Dalai Lama, as well as other Lamas and Rinpoches.

His Eminence spends most of his time in retreat, engaging in spiritual practices.