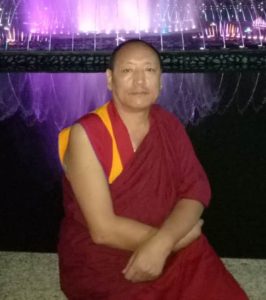 Khenpo  Jamyang  Losal was born in 1968. He received full ordination vows from His Eminence Luding  Khen Rinpoche Jamyang Tenpai Nyima at the age of twenty. In 1986, he joined Dzongsar Institute, India, and completed the study of the Eighteen Renowned Scriptures and auxiliary teachings under Khen Rinpoche Kunga Wangchuk. He also received numerous teachings, both on Tantra and Sutra, from HH Dalai Lama, HH Sakya Gongma, Ngor Luding Khen Rinpoche, Kyabje Dzongsar  Khyentse Rinpoche, Khen Rinpoche Apey, etc. He was appointed an assistant teacher in 1992, and Khenpo in 1995 .He taught almost all major treatises numerous times, for many years, including the Two Ornaments. He also taught Two Segments of Hevajra Tantra related to Vajrayana. Khenpo served as a member of the Shedra administration committee and finance in charge, as advised by Kyabje Dzongsar Khyentse Rinpoche. Starting in 2003, he served as acting principal of the Shedra for a few years. In 2008, after the passing of Khen Rinpoche Kunga Wangchuk, HH Sakya Gongma and Kyabje Dzongsar Khyentse Rinpoche appointed Khenpo Jamyang Losal as the abbot of the Shedra, and he served as the principal until 2013. Nowadays, in his free time, Khenpo travels abroad to give teachings. Apart from that, Khenpo stays in the Shedra, mostly in retreat.