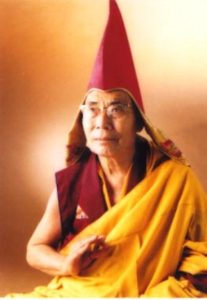 Khenchen Ngawang Kunga Wangchuk was born in 1921 in Markham district of Derge region in eastern Tibet to father Wuyuk Soten and mother Yorza Ayak. In 1939, he received the novice vow from Khenpo Zoepa Legshed. He received the vow of full ordination and the Path and Fruit teaching from His Eminence Ngor Thartse Khen Rinpoche Jampa Namkha Kunzang Tenpai Gyaltsen in Ngor Ewam Choeden monastery in 1940. In 1943, Khen Rinpoche came to Khamje Dzongsar Shedra to study and serve as the attendant to the then abbot Khen Rinpoche Dosip Thubten Gyatso. There he encountered Vajradhara Jamyang Khyentse Chokyi Lodro from whom he received the complete initiations and instructions on Vajra Yogini, Mahakala and the Eight Great Chariot of Practice Lineages.

From the year 1942 to 1950, he accompanied Khen Rinpoche Thubten Gyatso like his body and its shadow. He received all the teachings and completed relevant practices of all Eighteen Great Treatises. He was appointed as an assistant teacher at Dzongsar Shedra in the year 1945. He served as the assistant teacher for five years. From the finest teachers, like Khenchen Onten Khenrab, Khenpo Trinley Chophel, Dezhung Ajam Rinpoche etc, he received teachings on the Auto Commentary of Pramanayuktinidhi,  Pramanavartika, Pramana Samuccaya, etc.

Starting in 1950, in accordance with the instruction by Khen Rinpoche Thubten Gyatsho, he was appointed Khenpo of Dosip Monastery and managed it for four years. In 1955, in accordance with the instruction by Vajradhara Chokyi Lodroe, he was Khenpo of Wara monastery for three years. From 1959 until 1980, due to the changes in the situation in Tibet, he was sent to prison. He was released in the year 1980. On receiving a letter of instructions from Vajradhara Chokyi Lodroe’s Yangsi,Jamgyang Thubten Chokyi Gyatsho, he secretly came to Sikkim and met Yangsi Rinpoche. Under the vision of the young Yangsi Rinpoche, the new Dzongsar Monastery was established in 1983.

In 1985, a new Dzongsar Shedra was opened in Bir, Himachal Pradesh. Under the visionary instruction of Kyabjey Dzongsar Khyentse Rinpoche, Khenpo took the responsibility of the Shedra. Khenpo single-handedly gave teachings to all the monks. Untill 1995, he focused solely on giving teachings. After 1995, he visited Taiwan and other eastern countries, benefiting extensively both the Buddha Dharma and all beings. In 1999, he started constructing Dzongsar Chokyi Lodroe Shedra in Chauntra. He invited His Holiness Dalai Lama and the state ministers for inaugurating the Shedra in 2004. On the full completion of the Shedra, in 2008, he invited His Holiness the 41st Dagtri Rinpoche to consecrate the Shedra and bestow teachings on Lamdre Lobshay. On May 25th, 2008, Khenpo entered into Parinivana at eighty eight. After arriving in India, he received Kalachakra initiation, the Compendium of Tantras and all many quintessential instructions on sutras and tantras from four teachers; His Holliness the Dalai Lama, His Holiness Dagtri Rinpoche, Vajradhara Luding Khenchen Rinpoche and Kyabjey Dzongsar Khyentse Rinpoche. He also offered many teachings in gatherings presided over by His Holiness the Dalai Lama and His Holiness Dagtri Rinpoche. Thus, he became everyone’s teacher. He also produced many capable students who helped the Buddha Dharma to flourish mainly across India, Nepal and Bhutan. In brief, it is solely due to his great kindness that the complete teachings of the Eighteen Great Treatises still continue around the world. The editing group of collected works of Kuenwang and the Chokyi Lodroe editorial committee have edited fourteen volumes of his completed works. It has been cited from the preface, written by Khenpo Choying Dorjee, in Khen Rinpoche’s completed works.