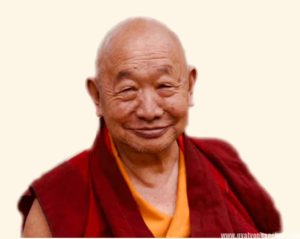 He was born in 1933, in Kham, Tibet, in a place called Dragyap Nyathpa. He was named Pema Gonpa. In 1940, when he was seven years old, he started learning Tibetan calligraphy from his father. In 1944, he received oral transmission of Longchenpa’s Seven Treasures and learned Tibetan grammar from Khenpo Karma Namgyel , who was the direct student of Khenchen Zhennga Rinpoche, in a place called Dragyap Serjur Ritroe. In the same year, he visited Dzongsar Tashi Lhatse and met Vajradhara Khyentse Choki Lodroe for the first time. From him, he received full Upasaka vows. He then stayed in a place called Bjago Tsang for a while. In 1945, he visited Dzongsar at a time when Vajradhara Khyentse Choki Lodroe was bestowing The Great Treasury of Precious Treasure teachings (Rinchen Terzod Chenmo), and from him he received more than two hundred initiations, including dharma activities related empowerments, i.e. the Vajrakiliya initiations, elaborate Wisdom Initiations, etc. In 1947 he was enrolled in Dzongsar Shedra  and received teachings from the 7th abbot, Dosep Thupten Gyelsten,  the 8th abbot, Minyak Damchoe Yoezer, the 9th abbot, Drakyap Khenrab Sengye, and, in doing so, perfected hearing and relevant practices on the Six Fundamental Philosophical texts, Thirteen Fundamental Scriptures and the Eighteen Great Treatises.

In 1952, he received the vows of full ordination from Khen Rinpoche Minyak Damchoe, then the principal and the eight abbot of Khamje Shedra. He was given the Dharma name Lungrig Mrawai Wangchuk. He served in Dzongsar Shedra as an assistant teacher for five years. In 1957, when he was twenty four, he went to Gonchen Ziphu Shedra as a Khenpo. In 1959, due to the changing situation, he was jailed for two years. Even during that period, taking risks and hardships, he secretly received numerous profound teachings from Taktshang retreat master Ngawang Khechog Woezer,  Throm Dokho lama Ngawang Sherab and Khenchen Khenrab Yoezer. More importantly, he listened and practised the profound Dzongchen teachings of Cutting Through Rigidity, Great Instruction on the Awareness of Guru, including the preliminaries from Luphug Lama Zhenphen Legdrub, a disciple of Vajradhara Jamyang Khyentse Chokyi Lodro. In 1983, he went to Derge Lhundrup Teng as the first Khenpo to preside over the re-established Monsoon Retreat.  In 1984, he turned the wheel of dharma on the Compendium of Sadhanas in Nangchen Tsangda monastery. In 1985, he taught in Gojo Luphug monastery and, in that very year, got a message from the Yangsi Rinpoche from India to restore and revive Dzongsar Khamje Shedra. In the following year, in 1986, he returned to Dzongsar Tashi Lhatse along with an escort from Dzongsar. He then began teaching in Ngari Labrang, which again gave rise to the dawn of the dharma activities in Dzongsar Khamje Shedra. Then, in 1988, all Shedra activities were moved to the newly constructed assembly hall and the hostels.  Dzongsar Shedra’s tradition of exposition on the Thirteen Great Treatises and the Eighteen Renowned Scriptures, including the auxiliary teachings, were revived once more.

In 1996 he taught and looked after the rebuilt Ziphu Shedra of Derge Lhundup Teng  for two months. Khenpo Kalden Tsering , his own student (well learned in Sutras and Tantras) was appointed as the abbot  of the Zhiphu Shedra jointly by Khyentse Yangsi and the congregation.

From 1990, after he relinquished the abbacy, time and again he turned the wheel of dharma on both Sutra and Tantra, including the Path and Fruition teaching and Experiential Instructions of Mahasandhi in Dzongsar Tashi Lhatse, Drayab Tsangsar, Gojo Luphug, Nangchen Tsangdha, Chabdho Chodha, Derge Zingdra Tho, Adho Marthang Mewa, Nyaro Gonsar  and Lingtsang Guze monastery. He also presided twice over the Sapen Nga Rig convention.