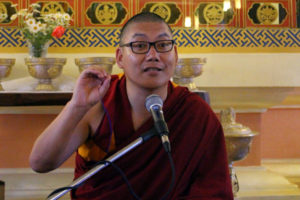 Khenpo Choying Dorjee started learning of reading and writing at the age of six. He received numerous initiations and teachings from Leda Jangchub Dorjee and his monastic vow from the great teacher Gila Rinpoche alias Ngawang Chophel Zangpo when seventeen. In accordance with the last wish of his late father, coupled with his own commitment and on the advice of Thromthar Khenchen Yeshi Zangpo from whom he received the master’s explanation on the Fruit and Path teaching and the Compendium of Saddhana, he joined Dzongsar Shedra in India in 1992 where he completed the study of the Eighteen Renowned Scriptures including auxiliary teachings under Khen Rinpoche Kunga Wangchuk and other teachers whom Khen Rinpoche nurtured. Khenpo Choying Dorjee received numerous initiations and instructions from HH Dalai Lama, HH Sakya Gongma Rinpoche, HE Ludhing Khen Rinpoche and Kyabje Dzongsar Khyentse Rinpoche including Kalachakra, and the Path and Fruit teaching.

He was appointed as an assistant teacher in 1999 and as a teacher in 2001. In 2002, amidst the large gathering of Shedra khenpos and monks, Khen Rinpoche enthroned Khenpo Choying Dorjee as Khenpo and gave him the name of Shedra  Khenchung. In 2004, Kyabje Dzongsar Jamyang Khyentse Rinpoche awarded him the Khenpo certificate in the presence of HH Dalai Lama.  In 2005, he was appointed as the Khenpo of Dzongsar Dharma Center in Malaysia and went to learn English in Singapore the next year. He returned to the Shedra in 2008 as advised by Khen Rinpoche. In 2009, on the instruction of HH Dagchen Ngawang Sonam, he served as the tutor of HE Dungsey Abikrita Vajra Rinpoche of Phuntso Phodrang until Kyabje Dzongsar Khyentse Rinpoche sent him as a visiting scholar to the University of Berkeley in 2011. As advised by Rinpoche, he served to the best of his ability for three years as Shedra principal from 2013. On the invitation of the University of Vienna in Austria, Khenpo Choying Dorjee attended the World Buddhist convention and gave a talk there.