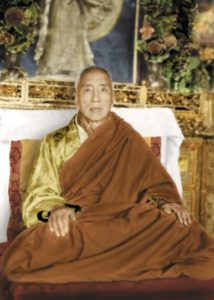 The 2nd Dzongsar Khyentse Chokyi Lodro was born to Gyurme Tshewang Gyatso and Tshultrim Tso in 1891 at a place call Rekhe Ajam in Kham. His father named as Jamyang Chokyi Lodoe. The great Jamgon Kongtrul Lodeo Thaye recognized him as the activity emanation of the Jamyang Khyentse Wangpo.

Kathok Situ Chokyi Gyatso invited him to Kathok monastery where he received his novice vow. At the age of fifteen he was enthroned at Dzongsar monastery the seat of his immediate embodiment. The second khyentse took his full monastic vow from a Khenpo of Dzogchen monastery.

While at Kathok, Situ appointed his own aged tutor Khenpo Thupten Rigzin Gyatso as the teacher of his young ward. From him he studied basic skills of reading, writing and memorizing the monastic liturgical texts.  From many other teachers like Khenchen Kunpal he studied five common sciences.

From Khenpo Onton Khenrab, Khenpo Kelzang Wangchuk, Nesar Traphel etc he studied Buddhist philosophy, which he is said to have mastered thoroughly. From some of the greatest Lama of his time from all of the Tibetan Vajrayana lineages, like Situ Rinpoche, his father, Do Drupchen Tenpai Nyima, Zhechen Gyeltshab  Rinpoche, Loter Wangpo, he received Tantric initiations and instructions. From his dedication to the practice of these teachings he gained unparallel realizations.  He always had visions of deities, masters of the past and was always protected by Dharmapalas. 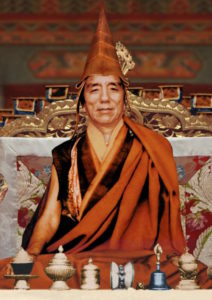 In order not to waste the offerings made by devotees, he sponsored engraving xylographic wood blocks for more than 25 volumes, including for the collected works of his immediate predecessor. He also rebuilt the Khamje monastery and started teaching college where 53 students were provided with free infrastructure and necessities. The Shedra produced some of the excellent scholars whose impact is still felt. He rebuilt a tantric Shedra at Kathok and took the responsibilities of looking after its administration for fifteen years. Many structures like Zangdogpelri and Thupchen Lhakhang were built by him.

Khyentse Chokyi Lodoe renovated the Dragang meditation centre which is dedicated to the practice of Sakyapa aural transmission. He sponsored 50 monks retreat and each retreat session is of four years. At the sacred site of Rongme Karmo Taktshang, he built a retreat house for 9 practitioners and each cycle is of five year long.  Here the practitioners mainly engages in the practice of treasure teaching of Jamyang Khyentse Wangpo, Jamgon Kongtrul and Chogyur Lingpa which then is supplemented by practice of Eight practice lineages.

At his main seat in Dzongsar, he renovated, enlarged many monasteries and chapels. He also sponsored building many monasteries, sending teachers to start Shedra in many parts of the Kham area.

Khyentse Chokyi Lodoe started to teach at the tender age of nine and continued throughout his life.  His teaching was always to the point; never entangled by unnecessary stuffs. He also never engages in the disputations and pointless debates. His teachings were always stitched to the needs and capacities of taught.

Until his later age when he took Tantric consort, he bestowed novice and full ordination to many practitioners. He also bestowed vows of Bodhisatva from both traditions on many occasions.

Following is the lists of Vajrayana teachings that he gave:

10.Six volumes of Jatshon Nyingpo once. 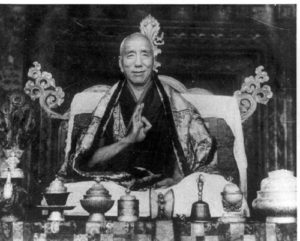 For the public he taught some of the basic Buddhist teachings like three main features of practice, meditation on the six syllable mantra etc.

At the age of sixty three he left Tibet with a small entourage passing through Lhokha, Sakya and arrived in Sikkim.  He went on pilgrimage in India for two times and also in Nepal. Wherever he went he blessed people from all walks of lives that came to see him. 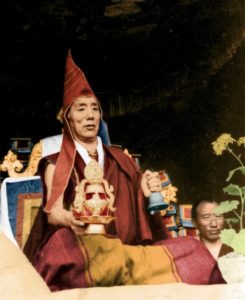 Among his Kagyupa students were Situ Pema Wangchen and his disciples, reincarnation of Jamgon Kongtrul and Drukchen Rinpoche.

His collected works gathered by Pewar Trulku consists of fifteen volumes. After serving the Dharma and beings for a long time, he passed away at the age of 67 in Sikkim on the sixth day of fifth Tibetan month, entering back into the wisdom mind of Vimalamitra.

The outer statue that houses his remains is in Tashiding in Sikkim and the inner statue is at Bir Khyentse Labrang.